The book: Cries of the Soul

“Cries of the Soul” is the autobiographical story of Khara Niné's life, thoughts and experiences her childhood as an adoptee from a Far East country to a Western one, from South Korea to Norway. 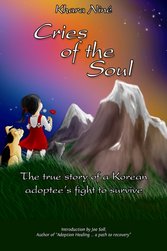 From Amazon: In 1970, shortly after the death of her mother, and without the consent or even the knowledge of her father, a barely one year old girl is put up for foreign adoption in South Korea. She ends up in an adoptive family where she spends her childhood suffering neglect and abuse at the hands of her adoptive parents. “Cries of the Soul” tells a story rather different from the more common, picture-perfect fairy tales of the adoption industry. With her original childhood and natural family stolen from her, Khara Niné describes the harsh reality of coping and trying to fit into a family where she doesn't belong, of grieving the loss of parents she can not even remember, and the emotional scars which she is still struggling to get to grips with more than forty years later.

“Beginning with the trauma of lying in the arms of her beloved Umma when she died, Khara takes the reader through her life’s journey with a colorful, flowing narrative, joyous in parts, yet mostly a soul wrenching description of one woman’s struggle to survive.”
— Foreword by Joe Soll, author of “Adoption Healing... a path to recovery”

All the artwork featured within “Cries of the Soul”, including the cover illustration, is created by the author's daughter who goes by the artist name of Arvata. Like much of the story telling in the book, the illustrations reflect a child's perspective on her life and the world around her. The imagery helps tie those reflections together and thus guide and enhance the reader's experience.

Message in a bottle